There was once a king with a fine house, who opened his doors and invited all his countrymen to come, and those who accepted his invitation entered in through the double doors that had his banners flying over them.

Now one group of guests, on entering, saw a fine room with a banqueting table fully laden, and they entered in. Having filled themselves with fine food they fell asleep. On waking, they cried out, “More Lord!”

Another group came to a fine room filled with many gifts, precious jewels, gold and silver, and they entered in. Having filled their pockets such that they could not move, or even fit anymore in, they still cried out, “More Lord!”

Yet another group found a ballroom, full of mirrors, and fine decorations, with music playing, and they entered in. Having danced, and danced, until the music stopped, they then cried out, “More Lord!”

And a fourth group came to a large room, full of furniture, fine decorations, manuscripts, other writings, and yet it was all laid out as the wind blows, so they entered in. Having spent much time ordering, tidying, and placing all in a set form, a servant of the king came with more for the room, and they said, “No more Lord!”

And then there were a few guests who came to a room with a small door, and a strange warmth emitting from it. So they bowed down, and entered in and found a table with bread and wine and at it one like a friend. They sat at his table, shared his meal, listened to him, and talked to him, and stayed.

And this friend arose, and said to them seated at his table, “I am the Lord of the house, and this kingdom, and I know you know me. Come, enter in to my glory.” With that he swung wide a door, and a bright and glorious light broke forth, and His throne room was truly revealed, and they entered in…. 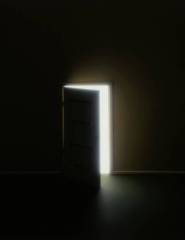 Which room are you in?