“Behold, the virgin shall be with child, and bear a Son, and they shall call His name Immanuel,” which is translated, “God with us.” (Matthew 1:23)

As we approach Christmas Day, and hear again the joyous songs, how wonderful is the reminder that God, in Christ, came as a Babe…to manifest this wonderful promise. Immanuel..God with us…no longer estranged from Him due to our sin, God revealed His fervent desire to be with us, and in Christ He would again was able to walk with us (as He did with Adam).

While those who believe in Him always carry God in our heart, it is also true that Christ in body ascended to be at the right hand of God until He placed all things under His feet. He will come again. But Immanuel is still here, for the Lord sent His Holy Spirit to be with us.

But the Helper, the Holy Spirit, whom the Father will send in My name, He will teach you all things, and bring to your remembrance all things that I said to you. (John 14:26)

When the Day of Pentecost had fully come, they were all with one accord[a] in one place. And suddenly there came a sound from heaven, as of a rushing mighty wind, and it filled the whole house where they were sitting. Then there appeared to them divided tongues, as of fire, and one sat upon each of them. And they were all filled with the Holy Spirit and began to speak with other tongues, as the Spirit gave them utterance. (Acts 2:1-4)

First, Immanuel was revealed in a way as God the Son, and now secondly, as God the Holy Spirit. Christ will come again, and this time not only does God the Son, and the Holy Spirit come, but so to God the Father. For thus at His return He comes as the triumphant King, Lord, full of glory and the beauty of holiness. God the Father,  Son and Holy Spirit manifested as Immanuel. Thus His Bride, the church, must be made ready, pure and white, full of Holiness…by the blood of Christ, and the power of the Holy Spirit, for only then can stand in bodily form in the presence of a Most Holy God, and loving Father. 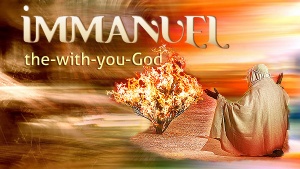 Now I saw heaven opened, and behold, a white horse. And He who sat on him was called Faithful and True, and in righteousness He judges and makes war. His eyes were like a flame of fire, and on His head were many crowns. He had a name written that no one knew except Himself. He was clothed with a robe dipped in blood, and His name is called The Word of God. And the armies in heaven, clothed in fine linen, white and clean, followed Him on white horses. Now out of His mouth goes a sharp sword, that with it He should strike the nations. And He Himself will rule them with a rod of iron. He Himself treads the winepress of the fierceness and wrath of Almighty God. And He has on His robe and on His thigh a name written: KING OF KINGS AND LORD OF LORDS. (Revelations 19:11-16)

“When the Son of Man comes in His glory, and all the holy angels with Him, then He will sit on the throne of His glory. All the nations will be gathered before Him, and He will separate them one from another, as a shepherd divides his sheep from the goats. And He will set the sheep on His right hand, but the goats on the left. Then the King will say to those on His right hand, ‘Come, you blessed of My Father, inherit the kingdom prepared for you from the foundation of the world: for I was hungry and you gave Me food; I was thirsty and you gave Me drink; I was a stranger and you took Me in; I was naked and you clothed Me; I was sick and you visited Me; I was in prison and you came to Me.’ (Matt. 25:31-36)

And yet, the beauty of this coming is that the love of the Father is such that His Son continues to intercede for us as preparation of His coming, and He continues to call us to Him through that wonderful door to heaven, Jesus Christ whose blood washes us, and who Spirit prepares us, for His coming. O Come, O Come, Immanuel.

Then last of all he sent his son to them, saying, ‘They will respect my son.’ But when the vinedressers saw the son, they said among themselves, ‘This is the heir. Come, let us kill him and seize his inheritance.’ So they took him and cast him out of the vineyard and killed him. “Therefore, when the owner of the vineyard comes, what will he do to those vinedressers?” They said to Him, “He will destroy those wicked men miserably, and lease his vineyard to other vinedressers who will render to him the fruits in their seasons.” Jesus said to them, “Have you never read in the Scriptures:

‘The stone which the builders rejected
Has become the chief cornerstone.
This was the Lord’s doing,
And it is marvelous in our eyes’? (Matt. 21:37-41)

And they heard the sound of the Lord God walking in the garden in the cool of the day...(Genesis 3:8a)