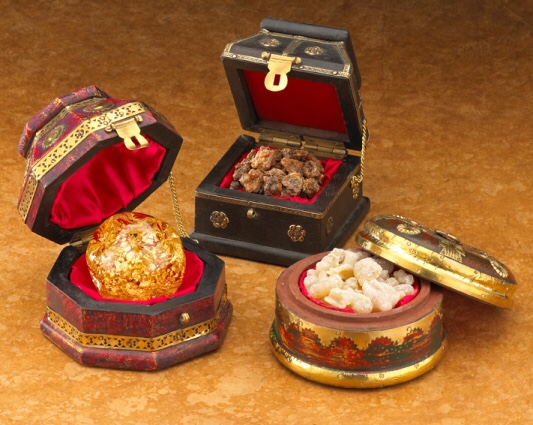 When they heard the king, they departed; and behold, the star which they had seen in the East went before them, till it came and stood over where the young Child was. When they saw the star, they rejoiced with exceedingly great joy. And when they had come into the house, they saw the young Child with Mary His mother, and fell down and worshiped Him. And when they had opened their treasures, they presented gifts to Him: gold, frankincense, and myrrh.

Then, being divinely warned in a dream that they should not return to Herod, they departed for their own country another way. (Matthew 2:9-12)

At first glance, and perhaps many others, the wonderful scene at the first Christmas of those three Magi (wisemen and kings) seems to speak once again about the joy of giving and worship. Truly royal gifts given to a lowly family in a stable, and ones pointing to the special nature of the infant Child. The gold of kings, the frankincense of priest, the the myrrh of perfume and burial balms. These gifts fulfilling thousand year old prophecies by King Solomon and the Prophet Isaiah, reiterating the salvation of God is found with this One. The Magi were doing a good thing.

And yet, even in these gifts these wise ones were making an exchange. Acknowledging that in return for their gifts of faith, for all they see is a baby in a young couples arms in the barest of surroundings, they can access the promised salvation. Sure, in reality they really had only to believe and confess in Him, and yet these gifts are brought by camel from a far, to show us in pictures the act of faith that is needed. Faith with works. But also the promise, salvation

As often told, and rightly so, the most poignant of these gifts is the Myrrh. This special balm used for burials, was a symbol of the burial needed to access our salvation.

He was oppressed and He was afflicted,

Yet He opened not His mouth;

He was led as a lamb to the slaughter,

And as a sheep before its shearers is silent,

So He opened not His mouth.

He was taken from prison and from judgment,

And who will declare His generation?

For He was cut off from the land of the living;

For the transgressions of My people He was stricken.

And they made His grave with the wicked—

But with the rich at His death,

Because He had done no violence,

Nor was any deceit in His mouth.

Yet it pleased the Lord to bruise Him;

He has put Him to grief.

When You make His soul an offering for sin,

He shall see His seed, He shall prolong His days,

And the pleasure of the Lord shall prosper in His hand.

He shall see the labor of His soul, and be satisfied.

By His knowledge My righteous Servant shall justify many,

As these amazing verses foretold, Jesus Christ was and is the great exchange for the wages of our sin. Only He, the Son and Lamb of God, could pay our price, and thank God it was a special sacrifice He only needed to make the once. Having died for our sins, buried in a tomb embalmed with myrrh and other fragrant spices, He took our pain and sorrows, bore the guilt of our sin, and the chastisement for our peace. And in His resurrection even death’s sting is taken for us.

And suddenly there was with the angel a multitude of the heavenly host praising God and saying:

“Glory to God in the highest,

What an exchange, our sins and those of the world, for His life. And yet it is done, and now we have access to such a gift through another gift, our heart for His. And so the angels of heaven celebrate. This exchange is also a walk of faith, as while as we believe on Him and confess the name of Christ as God and saviour we receive His eternal life, so we know Him as we continually come to Him with our sins to be washed free by His blood. This is the gift that just keeps giving, and one we can never earn by works or deeds, or in any way deserve. It comes as the gift to us from heaven as we believe and know the Giver.

While our spirit is born again at confession, our body and soul needs to walk this road called sanctification for our freedom, to be no longer burdened by the weight of our wrongs, casting aside shame and guilt by the grace of God and the power of the Holy Spirit. Preparation also for our heavenly roles. Jesus came that we may be free from the curses of sin, and so is this His eternal longing. Maybe, Christmas is a good time to remember this exchange, not only the one that brings salvation, but also the one that sets us free. How often are we hindered from joy by the burdens we carry? Jesus asks us to make the exchange afresh, giving Him our burdens, for His freedom and peace.

All who dwell on the earth will worship him, whose names have not been written in the Book of Life of the Lamb slain from the foundation of the world. (Revelation 13:8)

Then the King will say to those on His right hand, ‘Come, you blessed of My Father, inherit the kingdom prepared for you from the foundation of the world: (Matthew 25:34)

This is God’s plan, even from the forming of the foundations of the world. In a way only of God, who sits outside of time, the Lamb was slain to ensure we were built on a base of love, redemption, and access to His family. He comes to complete this work and to fully reveal or inheritance, and asks us to prepare for His return by being His living words of redemption.