For who has stood in the counsel of the Lord, and has perceived and heard His word? Who has marked His word and heard it? (Jeremiah 23:18). 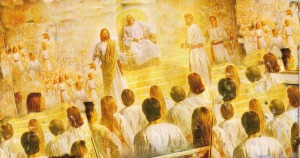 The counsel of God can be said to be where His Ecclesia meet with Him through His Son, the Lord Jesus Christ, with the others who are appointed join with Him in His throne room. Perhaps, another way to see this is where He meets in heaven with His heavenly court, and as we are found in Him, so to we meet in this court. This court is both in heaven, and in to be on earth as well.

Perhaps before progressing further, let us all remind ourselves of our legal position with Christ, and from there join with Him in pray. As I am sure you all know:

In short, I believe that as we are found in Christ, we are also found in His priestly order of Melchizedek (the royal priesthood referred to by Peter in the Bible), and we are at the very least in the spiritual realm we are seated with Him in governmental throne room (gathered around Him in His governing council) – and from this place operating in a measure of His Ecclesia, and as His ambassadors on earth, operate in His authority over the kingdom realms in which we are placed…as we intercede and prophecy according to His will and Spirit, and not lording over people as the world does.

There is a sense that as the return of Christ nears, and we near His millennial reign on earth and heaven, there will be a growing/increasing revelation of His will to see heaven on earth made manifest, and more saints starting to gather around Him and govern from heaven to earth in Christ…with intention, and revelation knowledge. There is a feeling that this also entails specific callings and anointings. Ultimately in His return this government is made more manifest as revealed in Revelations, as well as by Christ in Matthew and Luke, and Paul in 1 Corinthians, and I understand that this revelation can function now as a kind of first fruits…knowing how He governs is different than the world does, and He does also govern through earthly kings and governmental systems as He chooses.

Perhaps these Ecclesia will become so manifest on earth in the near future worldly governments will model themselves on it as they witness their fruit…others will be blind to this inevitable truth. So I guess this is a long way of saying that while I see there is a rising ecclesia, my sense is that this has been available for many a year, and saints from time to time have moved in this realm to various levels. This will increase. I do think there are also offices of His government that He gives to those He chooses, and differing levels of governing responsibility, time, authority,, etc,…but that is another big story (and I sense this is already too long), and one that is better informed by understanding that comes from the fuller counsel of God as revealed through His prophets, intercessors, and apostles. At one levels we who are found in Him all operate as part of our Lord’s Jesus government.

And with that, know that you can join Him in His council. So perhaps join with others who love our Lord, or alone in your prayer closet, could I ask that you wait on the Lord (knowing we His sheep hear His voice), perhaps with a worship song playing..and with the enabling of the Holy Spirit and the understanding of our heavenly placement, and see what words or thoughts or pictures etc the Lord reveals to them.

Knowing the Lord speaks to His body, and that He reveals His bigger picture through us all, could you then join with a few around you to share what they heard, and join together to pray in that which God reveals as they share the bigger picture together they make. Comforted also by the knowledge He is with us[11] as two or three gather in His name.

One final comment, as you would know Christ also sits at our Father’s right hand making intercession for us[12] and His creation, and so it is that as we are found in Him, His Spirit may also intercede through us..from His heavenly perspective.  So, some of you may find yourself interceding, while others may be praying or prophesying from the position of God’s authority.

After that, if time permits, it would be good if a representative from each group could shout out what God had revealed to them to pray.

For I know the thoughts that I think toward you, says the Lord, thoughts of peace and not of evil, to give you a future and a hope.[13]

In short,.– and from this place operating in a measure of His ecclesia, and as His ambassadors on earth, operate in His authority over the kingdom realms in which we are placed…as we intercede and prophecy according to His will and Spirit, and not lording over people as the world does.

By extension, let us see how this council of God can be manifested on earth. A ‘Community Cabinet/Council’ is a group of devoted, loving, Christians who understand the legal position in His council, who seek God’s will and prophetic insight for a region – broad across the whole community, not only church. Principally they are about addressing God’s plan for a region. The is a strong sense of the call of the Holy Spirit to this Cabinet, and the acknowledgement that it is lead by the Holy Spirit.

In summary, the Cabinet key goals and operation is summarised as:

Thus this ‘Community Cabinet’ is the Ecclesia made manifest on earth as it is in heaven., and is a precursor to Christ’s return, as He prepares for the Kingdom Government on land. Having said that, it is something Christ commissioned us to manifest now.

In the natural it will work alongside existing governing structures, but not be bound to them and their decisions, as the only authority they fully submit to is God not man.

This is NOT about taking over local, state, or federal government. Rather it models the future of Government..to see Kingdom governance in operation. Christians will be welcomed to come and see how this is unfolding. The group understanding the broader responsibility and governing , means they will determine the focus for today, meanwhile looking to the future.