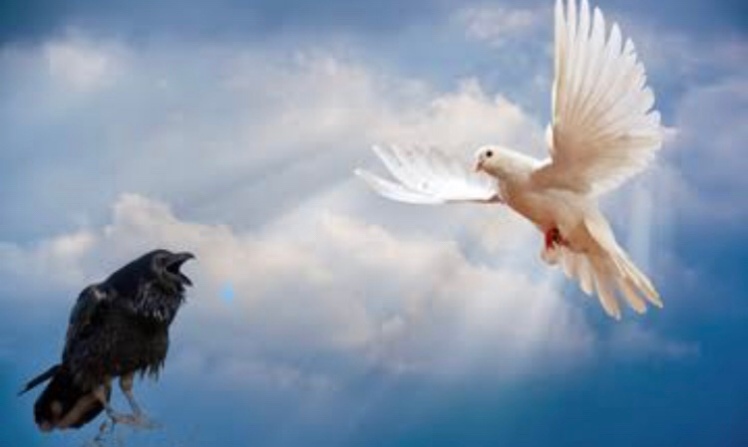 Let us consider the raven and the dove, and their symbols of God’s grace as found in the Bible.

In summary, suggesting the raven speaks of, ‘But first comes the prophet(s) before the coming of dove manifested as Anointed One (the Christ) the Prince of peace, The messiah, and the triumphant King of kings’ – meaning now the ravens will come again to prepare for the Jesus Christ’s, the King of kings, return.

I submit that the symbols of the these birds will no doubt mean different things, but I feel God speaks of a wonderful mystery through the raven and the dove. The raven being the messenger (Mal. 3 and 4; Matt. 11:10; 17:11; Luke 1:17) who brings the truth in times of drought of the word of God, this truth by revelation and is real meat (not the milk continually served up In the church), and operating in the anointing of Elijah, principally concerned with preparing the way for the return of Christ (as it occurred at the first coming). In this ministry, turning hearts to the Father in heaven. Perhaps released in the times of Noah, the Raven also speaks of the watchman looking for the coming Peace of (and with) God in Christ.

I sense Revelations 11 speaks of the witnessing church which operates in this anointing..rather than just one person, this is a prophetic company who by revelation and encounter know the coming Millennium, and prepare for Christ’s return and that which follows. God confirming His word spoken through these prophets with signs and wonders as these people also walk in Christ. The rise of Elijah and Christ return completing the fulfillment of Malachi 4.

Always love how you can see the Spirit of God travelling through the Bible in the form of the dove, who also represents the Anointed One. The raven (watchman prophetic) also, who did go first at the time of Noah (Gen. 8:7-11), in a way its spirit/anointing travelling on through the Bible and time to emerge as, and meet, Elijah and in so doing being a sign that it represents the messenger the anointing of Elijah. He being the messenger who brings the word to prepare for the godly King and to refine God’s people. And then this anointing continues travelling through God time to emerge again at the Brook Cherith/Jordan River where John the Baptist starts His word ministry with great power of the word, preparing for the coming of Christ (the Prince of peace completely also of the Spirit of God). Importantly, its the Prince of peace (the dove and His Spirit) who brings the message of true Peace with God, because He brings the peace

So this prophetic anointing will come again and emerges soon, even very soon, ministering both in the power of Word and signs and wonders as God gives mankind one last chance to repent, and to purify His Bride, before the Second Coming, when The Lord Jesus Christ manifests Himself as the King of kings..and all that goes with it. This witnessing church baptised with Fire. The prophet will decrease that the Lord increase, but the Lord does honour and defers to the prophet as part of His revelation to the world (see baptism of Christ by John the Baptist as an example). In some ways you could also say the ravens represent end time prophets, and the doves the apostles.

Long winded, sorry, so much more to say, but hope this makes sense and helps. Conscious we only see in part, so may only that which is of God stand, and the remainder fall away. For your discernment in Christ Jesus.

One thought on “The Dove, the Raven, and the Second Coming”